While most legal cannabis attention of late has focused on the high rewards of mega deals, the risks associated with state law noncompliance remains as high as ever.  On July 30, 2021, the Sixth Circuit Court of Appeals affirmed marijuana and conspiracy charges and convictions against an individual for the manufacture, distribution, and possession of marijuana with intent to distribute, violations of the Controlled Substances Act, 21 U.S.C. §§ 841, 846,1 and simultaneously weighed in on the Blumenauer Amendment.  The Amendment, commonly relied upon by state officials and their licensed cannabis operators, ostensibly prohibits the U.S. Department of Justice ("DOJ") from prosecuting those in compliance with state medical marijuana statutes. 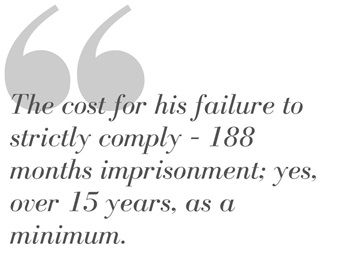 The defendant claimed to be a caregiver registered under the Michigan Medical Marihuana Act ("MMMA"), but his prior felony conviction was a statutory bar from lawfully holding the role under the MMMA.  Therefore, the court determined, the defendant did not strictly comply with the Amendment. The cost for his failure to strictly comply – 188 months imprisonment; yes, over 15 years, as a minimum.

The Sixth Circuit2 provided one of the few analyses of the Amendment's3  effect,4  from which we can extract some guidance about its practical operation – at least within the two legal cannabis states the court covers.

First, the Ninth Circuit's5 2016 interpretation of the Amendment6 provides a sound, reliable analysis.  The Sixth Circuit relied on the Ninth Circuit case, even though it is not legally bound to do so, and, with limited exceptions, followed the procedures outlined therein. The court assumed – but did not decide – that section 538 is robust and prohibits the DOJ from expenditures for the prosecution of individuals who have "strictly complied" with state medical marijuana law.

Second, if undisputed facts establish noncompliance with the MMMA, a defendant is not entitled to whatever protections – if any – that Section 538 might provide, and no pretrial hearing is necessary.  In this case, the trial court (Western District of Michigan) afforded the defendant a pretrial hearing at which he would bear the burden of showing his "strict compliance" with the MMMA.  But on the other hand, the court warned that the government could use any testimony the defendant gave as part of its case-in-chief at trial.  In any such pretrial hearing, a defendant must make at least some initial showing of contested facts to establish compliance.  The defendant opted not to testify and did not put on any other evidence, leaving the government's version of facts uncontested. Fourth, the government can charge for a conspiracy to violate marijuana laws if the conspiracy predates the Amendment (i.e., Dec. 2014).  In this case, the charge predated the recreational law change in Michigan.  Although the court made passing reference to the state law's expansion into adult recreational use, the court did not address any of its implications, and there is no recreational use provision in the Amendment.

4. The Amendment states, in pertinent part:  "None of the funds made available in this Act to the Department of Justice may be used with respect to any of the states [listed in this section] to prevent any of them from implementing their own laws that authorize the use, distribution, possession or cultivation of medical marijuana."