Don't worry - the rest of this post is in English.

Employees at a French factory are reportedly up in armes because their employer plans to require them to wear "social distancing" alarms while on the job.

The alarms go off whenever two people are less than two meters apart. For us Americans, that's roughly six feet. According to the Daily Mail, when two employees get too close, the alarms make an 85-decibel sound, and vibrate, and have red flashing lights. They are to be worn around the neck (in fairness, I think, like a lanyard, not as a choke collar) or around the waist.

(According to this website, 85 decibels is roughly equivalent to the volume you get from running your garbage disposal. Being exposed for 8 hours can lead to "possible" hearing damage, but I assume the exposure has to be continuous.)

Oh, and the devices also have contract tracing ability. This employer will never have to worry about sexual harassment again!

But a union is saying non to the alarms and likens them to dog collars -- or "colliers de chien." According to the union, the devices are "anxiety inducing," "intrusive and infantilizing," and an "attack on individual liberties." Although the devices are being used as a COVID preventive measure, the union expressed fears that the company would continue to require them after the pandemic is over.

I've gotta side with the union on this one. The commenters at the Daily Mail seem to be on the union's side, too. Here's are some of their best: 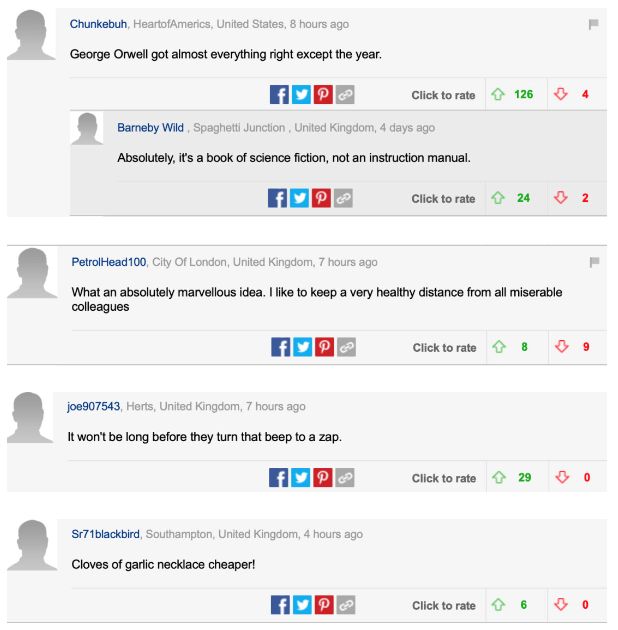 After the outcry, the employer -- which is actually a Swedish, not a French, company -- said that it might have the devices configured so that they vibrate but don't light up or make sound.

I guess that's a soupçon better.

APOLOGY TO OUR FRENCH-FLUENT READERS: My headline is probably wrong because I took Spanish in high school. It was supposed to mean "Employees rebel at anti-COVID dog collars." If it doesn't, please accept my apologies and blame Google Translate.