In this next instalment of our series of articles looking at patenting cannabis-related inventions, our focus is on the growth in industrial biotechnology in this area: genetically modifying plants or host organisms to produce key intermediates in the cannabinoid pathway, or end cannabinoids themselves.

Historically, as commercial and medical interest in cannabinoids increased, technologies, and resulting patent filings, focussed on methodologies for extracting relevant cannabinoids from cannabis plant extracts. Such techniques are inherently limited by the quantities of active compounds, or their precursors, naturally produced by the plants: supply of sufficient levels of plant materials has to keep up with the demand, while being constrained by the requirement to only grow plants in a secure environment, and the large quantities of energy and water required to grow the plants and isolate the cannabinoid products.

In a world concerned with climate change and energy demand, interest has therefore naturally turned to more industrial processes, in particular, the use of genetic engineering to increase enzymatic turnover within the cannabinoid pathway, either in cannabis plants for increased yield after extraction, or in host systems such as E.coli or yeast.

The biosynthesis of cannabinoids in nature is shown in Figure 1, and includes the enzymes olivetolic acid cyclase and prenyltransferase, to make the key intermediate cannabigerolic acid (CBGA). CBGA is then converted by cannabinoid synthases to either Δ9-THCA or CBDA, intermediates which are non-enzymatically converted to Δ9-tetrahydrocannabinol (the psychoactive component of cannabis) and cannabidiol respectively. 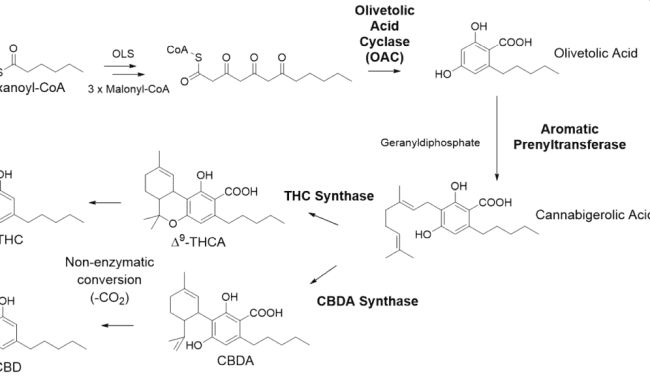 Companies such as Genomatica and Ginkgo Bioworks are developing extensive patent portfolios around variant enzymes along these pathways, and engineered cells which express these enzymes. In recent years, Genomatica's WO2020/214951, WO2020/247741, WO2021/211611, and WO2021/046367 have published, directed to olivetol synthase variants, olivetolic acid cyclase variants, cannabinoid synthase variants, and prenyltransferase variants respectively.

With so much patenting activity in this area, notably from US companies, what do patent applicants need to think about when preparing patent applications, to maximise their chances of obtaining broad, commercially useful protection in Europe?

The most cost-effective way of obtaining broad geographical coverage is of course via a European patent application at the European Patent Office (EPO). However, a little forethought and planning before filing a US provisional application, and/or a PCT application, can increase the chances of obtaining allowance of claims with a usefully broad scope in Europe.

While there is a basic requirement at the EPO that a gene sequence is only patentable if it is capable of industrial application, this is easily met for most cases – particularly in the cannabinoid sector – in which there is a recognised therapeutic application requiring industrial production of active compounds: a simple statement in the specification setting out the industrial applicability usually suffices.

A nucleic acid having a sequence that is at least 80% identical to SEQ ID NO:1 and wherein the nucleic acid encodes a polypeptide having olivetolic acid cyclase activity.

A polypeptide comprising a sequence that is at least 80% identical / similar to SEQ ID NO:2.

A polypeptide including at least 80% homology to SEQ ID NO:2.

Sequence identity – what does it even mean?

"Sequence identity" refers to the number or percentage of nucleotides/amino acids that match exactly between two different sequences over a defined length in a given alignment, while "sequence similarity" refers to a resemblance between two sequences when compared.

Based on the open language of the above example claims ("having", "comprising", "including"), the sequence identity can be determined in different ways, depending, for example, on whether the subject and query sequences have the same length or different lengths, or how the sequences are aligned. How this is defined in the claims and specification can lead to very different results when it comes to assessing novelty of such a claim. In addition, the EPO may also consider such claims unclear and thus not allowable.

Figure 2 shows why it is advisable, if not essential, to specify the algorithm used, or at the very least how the identity is to be defined:

Looking at the hypothetical example in Figure 2, if the identity is defined with reference just to the alignment over the 200 nt sequence, then the percentage identity is calculated as being 98% (with the calculation being (200-4)/200 = 98%).

The EPO's Guidelines for Examination at F-IV, 4.24 explain how "sequence identity" and "sequence similarity" are interpreted, and unequivocally state that if no algorithm, calculation method or similarity-scoring matrix is provided or defined in the application, the broadest interpretation of these terms will be applied, using any reasonable algorithm, calculation method or matrix known at the relevant filing date.

In addition, if the similarity or homology is the only feature to distinguish the subject-matter of a claim from the prior art, the EPO will raise a clarity objection unless the determination or calculation of the percentage of homology is clearly defined in the application as filed.

Using the above example, loss of identity between what a patent applicant intends (for example BLAST local alignment) and what the EPO might search (alignment over a larger subject sequence) could result in a variant sequence being considered to lack novelty and/or be unclear if no algorithm was defined. As a result, without suitable fallback positions (e.g., to the algorithm, or the length of sequence) included at the drafting stage it may not be possible to amend the claims to restore novelty.

Engineered or mutant enzymes that have higher yields, faster turnover, or higher enantioselectivity are sought after in any industrial setting and are commodities or assets that need to be protected. It is important that patent applicants do not lose sight of the European Patent Office's examination practices for biotechnological inventions defined by nucleotide or amino acid sequence (or, indeed, the entry into force on 1 July 2022 of ST26 relating to the preparation of sequence listings - see here) if a competitive edge in Europe is to be secured.

ARTICLE TAGS
UK Cannabis & Hemp Intellectual Property Patent
POPULAR ARTICLES ON: Intellectual Property from UK
Intellectual Property Infringement: Directors' Personal Liability
Humphreys Law
Remedies for intellectual property infringements include damages or, at a successful claimant's election, an account of profits.
Patents In Music On World Music Day
J A Kemp LLP
World Music Day, or Make Music, was launched in 1982 in France as the Fête de la Musique, it is now held on the same day in more than 1,000 cities in 120 countries. In this article, we explore some...
Copyright Dogfight
Marks & Clerk
On 6 June, Paramount Pictures, the production company behind Top Gun: Maverick, was sued for copyright infringement in the USA by the heirs of Ahud Yonay
Collaboration In The Autonomous Vehicle Sector
Marks & Clerk
Self-driving vehicles are not yet legal in the UK, although public trials – such as the autonomous shuttle service on Harwell's Science and Innovation Campus here in Oxfordshire...
European Inventor Awards Finalists Invent Disparate Solar Technologies But Share A Common Belief In Patents
Marks & Clerk
The European Patent Office (EPO) announced the winners of their 2022 European Inventor Awards on 21 June 2022.
Why Trade Marks Are So Important To Translation Of Video Games To Film And TV
Marks & Clerk
It's great to see that there is still appetite for well-known video games to be translated into films and TV programmes, with The Last Of Us TV show due to be launched shortly...
FREE News Alerts
Sign Up for our free News Alerts - All the latest articles on your chosen topics condensed into a free bi-weekly email.
Register For News Alerts
Article Tags
UK Cannabis & Hemp Intellectual Property Patent
Similar Articles
Powered by mondaq AI
MATCH
45%
How Do I Go About Getting A Patent? Keltie LLP
47%
Double Patenting In The EPO J A Kemp LLP
47%
Double Patenting At The EPO – The Enlarged Board Takes A Second Look Dehns
46%
Chemical Patents – How To Get The Protection You Want In Europe Part I: Defining The Invention Gill Jennings & Every
46%
British Science Week: Patent Filing Strategies, And The Importance Of Portfolio Growth Gill Jennings & Every
Related Articles
UK Government Publishes Response To Consultation On AI And IP J A Kemp LLP
Copyright In Fictional Characters: Del Boy In The High Court Shepherd and Wedderburn LLP
Damages – No Turning Back Marks & Clerk
EPO's Young Inventors Prize 2022 Marks & Clerk
Opt Out Of The UPC And Opt Back In Later – A Low-risk Choice Maucher Jenkins
Mondaq Webinars
A Strategic Look at IP Protection and Enforcement in Africa - Effective use of the Regional Systems of ARIPO, OAPI, Madrid & Hague
Adams & Adams
Webinar Pretoria South Africa
Contract Management - The Importance of Cross-Functional Collaboration
Nexdigm Incorporated
Webinar Chicago United States
More Webinars
Comparative Guides
Anti-Corruption & Bribery
Artificial Intelligence
Banking Regulation
Blockchain
Cartels
More Guides
Mondaq Advice Centres
UK
Coming to and Investing in the UK
Global
Trademarks in SAARC Countries
More MACs